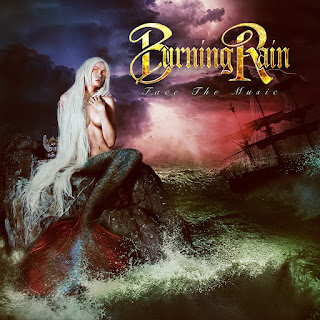 With, already, three solid albums on their sleeves, Burning Rain build a strong reputation around their name especially for the amazing guitar work by Aldrich but, also, for the smooth and heart-full vocals of Keith St. John.

The debut opus by Burning Rain was released back in 1999 and it was a damn fine record that contained some excellent hard rock songs, filled with a strong heavy blues vibe, a tight musicianship and, of course, powerful performances. The album gained positive reviews from both fans and critics. The second step of the band came one year later with the title "Pleasure To Burn". In my humble opinion, that was the band's best album to-date. A harder sound, more amazing riffs and solos and in one word that album was a killer one. In 2013, Doug and Keith decided to release a new record. "Epic Obsession" was the title of the album and it was again a solid one.

"Face The Music" kicks-off with a 'classic' Burning Rain track; "Revolution" is a guitar-driven tune, Keith St. John's smooth vocals and boom...we have the first highlight of the new album. The six minute track of "Lorelei" is a good hard rock track, more in a late 70's mood, while in "Nasty Hustle" we have a really cool rockin' song that includes a nice chorus line and, of course, a more 80's L.A. feeling in it. "Midnight Train" is 100% Burning Rain and it's for sure one of the best tracks out of the new record. Heavier, groovier and huge hard rock stuff at its best!  "Beautiful Road", "Hit And Run" and the fantastic bluesier "If It's Love" are all three great samples of Burning Rain's music.

Burning Rain is a band that knows how to deliver quality and heart-full hard rock music with attitude, no doubt about that! The combination of the amazing guitar lines by Doug Aldrich along with unique vocals from Keith St. John (plus the tight rhythm section) create a damn solid hard rock album that will be praised by the majority of the rock community.