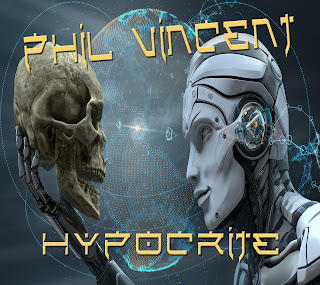 Multi-instrumentalist Phil Vincent is back in business with, already, his 21st solo album!!! The new opus is going to be released on February 27th and once again it combines a modern melodic hard rock sound with the classic heavy rock sound of bands such as Winger and Dokken to name a few.

The new album features lead guitarists Vince O’Regan and Peter Cox to share some excellent and inspired riffs and solos and Dirk Phillips on drums.

The opening tune of "Broken" is simply awesome and smokin' melodic heavy rock stuff at its best. A fast-paced heavy rocker that features in-your-face vocals, heavy (still melodic) guitars and a chorus line enough to bang your head. The modern "Back In The Day" reminds me a lot of Kip Winger's solo works while in "Nobody's Gonna Miss You" sounds like it jumped out from the late 80's but with a more modern approach. For sure, this is another killer track out of the new record.

"Waste Of Time" and "Caught In The Act" are both solid and modern heavy rockers that both reminds me of Winger's latest works. Both tracks include heavier guitars, a big groove and some cool melodies. Very interesting stuff. The straight forward "Long Way Down" and the synth-rock driven "Never Enough" are two more very good songs that I enjoyed a lot. The track that closes the new opus, "Hypocrite", is for sure the most modern and diverse track of the album.

Phil Vincent rarely disappoints with his albums and "Hypocrite" is yet another strong sample of his really admirable career. Some killer tunes in it, great guitars, an overall tight sound with the necessary modern vibe and some Winger 'pinches' here and there makes "Hypocrite" a must 'listen' for all the fans of the modern hard rock scene (...and not only).