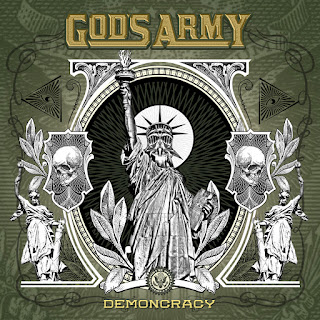 GOD'S ARMY is a band that is consisted of members of Helloween, Scanner, Firewind, Outloud, Vivaldi Metal Project and Joe Stump’s Tower of Babel and nowadays they release their second effort with the title "DEMONCRACY" through Rock Of Angels Records.

"Free Your Mind" is one of the album's highlights. A powerful heavy rock track (in some parts reminds me early Motley Crue!!!) that is among my personal favorites out of "Demoncracy". The guitar work here is absolute killer! "Enemy Maker" is a bit heavier, groovier and more aggressive but it's again a solid one. In "Final Destination", the band is movin' into some progressive territories while in "Before The Fall" the band delivers yet another killer song. This is a straight forward melodic hard rock gem with a huge harmony in it and a very Queensryche-esque vibe. Love it!!

This is a killer record that surprised me in a very positive way! It's an album that mixes perfectly a variety of styles (melodic hard rock/progressive/metal/rock) of the rock scene, in general, and, at the end, achieves to leave a sweet taste in your ears. One of the most interesting releases so far!!