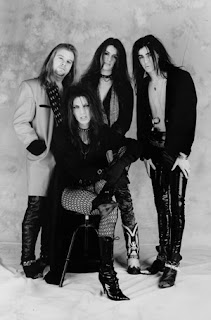 Street Symphonies Records is proud and excited to announce that it will reissue the long sought-after debut album from the cult Italian sleaze band Jolly Power, titled 'Like An Empty Bottle'.


The album, originally issued as an audiotape in 1994 (and not available on CD since then), is going to be renamed 'Like An Empty Bottle... Again!' and will contain five unpublished bonus tracks, some fan-filmed video footage and brand new artwork. The release date is set for September 2011 and will be available at http://www.streetsymphonies.com/ .

Jolly Power started out in 1988 thanks to a project created by Luchy Chiva (guitar), Bely (bass) and Dynamite XXX (drums); later joined by Elia (vocals). The debut 'Like an Empty Bottle' (1994) and the following 'Fashion, Milk and Smokin' Pills' (1996), recorded with this line up, helped gain a widespread success both in Italy and abroad. Elia left the band in 1998, with Bely in a new role behind the microphone and some other minor line-up changes, Jolly Power released two more full lengths, 'The 7th Crash from Hell' (2000) and 'Taste the Blood of the Sonic Revolution' (2004). After many concerts in Italy and foreign countries to promote the CD, the band decided to stop and rest until 2007, when the original singer Elia retained his lead position to record two previously unreleased tracks. Three more songs, dating back to 1994/96, were recorded between March 2008 and 2011. In 2009 Elia left the band once more, and Jolly Power are still looking for a singer who could be the missing piece.

Posted by Heavy Paradise
at Tuesday, May 31, 2011 Labels: news 2011
Email ThisBlogThis!Share to TwitterShare to FacebookShare to Pinterest