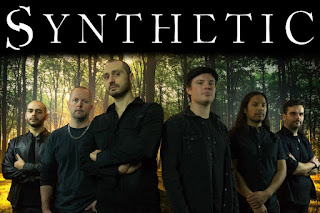 SYNTHETIC is a modern melodic metal band that uniquely blends Nordic and British metal soundscapes with thought provoking lyrics to create a refreshing proposition. In a magazine feature, Metal Hammer UK described SYNTHETIC’s sound as "melody meets proggy death in a genre splattering melting pot“ and placed the band next to the likes of Evergrey , In Flames and Amorphis The band is based in Cambridge, UK, officially formed in 2014, self-released its debut album in 2016 and started performing live in 2017. During the making of its debut album, the band was fortunate enough to collaborate with Dirk Verbeuren of Soilwork then, now drummer of Megadeth , and with Ettore Rigotti of Disarmonia Mundi and Coroner Records .

The band quickly advanced to headlining local gigs and being invited to national festivals across the UK, playing in some of the country's most renowned venues such as The Met Lounge in Peterborough, Club 85 in Hitchin, B2 in Norwich, The Venue in Selby, T Chances and The Unicorn in London, The Voodoo Lounge in Stamford and The Portland Arms in Cambridge.

We proudly announce today the signing of a new album deal with SYNTHETIC and welcome the band to the ROAR! Rock of Angels roster. More info on the band’s new album release date and details coming soon!