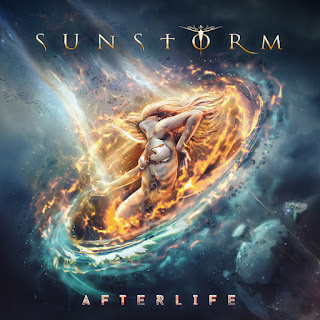 SUNSTORM is a band that was originally created by Frontiers Music's president Serafino Perugino. The overall idea was to create a strong and extremely melodic project and the right vocalist for this project was Joe Lynn Turner. With Turner SUNSTORM released five solid records (the first three are classsic in my book) that every melodic rock fan should own.
The news came very quickly to the melodic rock freaks that the new Sunstorm opus will feature a new singer on board!! Yes; Joe Lynn Turner was out and the new guy on board is the extraordinary shouter Ronnie Romero (Lords Of Black) ! All these news, of course, confused Turner's die-hard fans and got 'em angry and the result was a 'fight' in the social media against the 'old' Sunstorm and the 'new' Sunstorm fans. As far as I'm concearned, I was waiting to listen to this brand's new effort and to decide.
So, "Afterlife" is entitled SUNSTORM's brand new record and, apart from Ronnie Romero on lead vocals, we have, also, the very talented Simone Mularoni on guitars, Nik Mazzucconi on bass guitars, Michele Sanna on drums and Alessandro Del Vecchio on keys. Del Vecchio is also responsible of handling the songwritting on the new opus.
The opening tune of "Afterlife" kicks-off the new album impressively; a fast-tempo heavy rocking track that must be played on a maximum volume!! Really ass-kickin'! "One Step Closer", "Swang Song" and "Stronger" are all three excellent samples of pure melodic hard rock bliss. All these three above mentioned tracks include this sweet late 80's hard rock vibe with an updated sound and Romero's strong performances in front row. The groovier "I Found A Way" is a good and more classic song while in "Here For You Tonight" we are dealing with one of the highlights out of "Afterlife". Check out, also, the fantastic and ultra commercial tune of "Darkest Night" which is a killer one and feature a catchy chorus line to die for!
Overall, this is a great record all the way. "Afterlife" is an eleven track album that will please every fan of the melodic hard rock sound. The songs are all well-crafted, well-composed and well-written. The guitar licks by Simone Mularoni are out of this world and Romero's performances are strong and passionate. The rhythm section is tight as hell, the choruses are big, the melodies are larger than life and the bottom line is that "Afterlife" is a must have for every hard rock freak out there!
Songwritting : 8
Production : 8
Songs : 9
Musicianship : 9
Overall Rating : 8,5 / 10