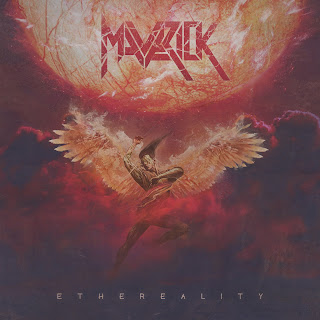 Irish hard rocker MAVERICK is releasing its brand new opus, this April, entitled "Ethereality". The new record is going to be released through Metalapolis Records and the sure thing is that will make some noise.
Maverick is a band that was formed back in 2012 by the Balfour brothers in Belfast, Ireland, and since then the band released an EP and three full-length efforts and toured with some big names of the international hard rock scene such as TREAT, DEF LEPPARD, TESLA and THE POODLES just to name a few.
After the very first spin of "Ethereality", I have to say that I was really impressed!!! The sound is bigger, groovier with some tasteful melodies in it and David Balfour's in-your-face vocals in front row enough to make you wanna turn up the volume on 10!
The opening tune of "Falling" is probably the best tune of "Ethereality"; it's big, guitar-driven, powerful, in-your-face and it includes a killer chorus line enough to bring your house down!!! Next, in "Thirst" we have yet another impressive track that reminded me a bit of Skid Row's earlier works. "Never" is a true gem of a song; more staright-forward with a modern heavy rock vibe in it this is just awesome!! "Switchblade Sister", "Bells Of Stygian" and "Angels 6" are all three solid samples of classic heavy rock stuff while in "The Last One" the boys are delivering another cool modern hard rock tune full of big melodies, a catchy as hell chorus line and a Daughtry vibe in it! The fast-paced, foot-stumping "Dying Star" is again an excellent slice of classic hard rock while "Light Behind Your Eyes" and "Ares", which are closing this brilliant release", are both good.
"Ethereality" is a bigger than life album that includes a bad-ass sound, killer songs, melodies, loud as hell guitars and powerful perfromances! The band's best record to-date, period!
Songwritting : 8
Production : 8
Songs : 10
Musicianship : 10
Overall rating : 9 / 10
Facebook: https://www.facebook.com/MaverickBelfastuk Instagram: http://instagram.com/maverickbandofficial