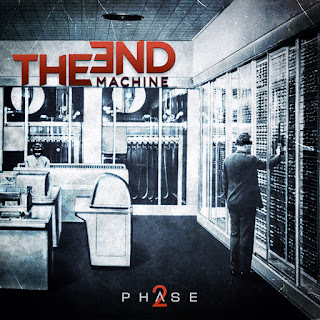 THE END MACHINE is a supergroup that consists of the amazing George Lynch (Dokken, Lynch Mob), Jeff Pilson (Dokken), Robert Mason (Lynch Mob, Warrant and Cry Of Love) and Steve Brown (the brother of Mick Brown).
As a band, they released a fantastic debut back in 2018 and nowadays they are back with effort number two entitled "Phase 2". The new opus is going to be released through Frontiers Music this April.
As in the debut, the same here, the band continues to deliver hard hitting heavy rock with strong references to bands such as Dokken, Lynch Mob and, also, to some newer Warrant (Mason era). The guitar licks of Lynch are inspired, heavy, melodic and, in my humble opinion, his best since his earlier Lych Mob/Dokken days. Mason's performances are top notch and the rhythm section is tight!
The two opening tunes, "Blood and Money" and "We Walk Alone", are simply awesome and 'smell' Lynch Mob from miles away! The modern "Dark Divine", the classic Lynch Mob-esque "Prison Or Paradise" and the bluesier "Scars" are all three some great samples of this true amazing band! Check out, also, the edgier "Shine Your Light" and the Cry Of Love-esque "Born Of Fire" and you'll discover two more gems out of "Phase 2"!!!
Bottom line is that THE END MACHINE with their brand new "Phase 2" opus are delivering an overall great record in the vain of the classic Lynch Mob,Dokken sound with a modern/updated twist in it!
Songwritting : 8
Production : 9
Songs : 9
Musicianship : 9
Overll Rating : 8,75 / 10