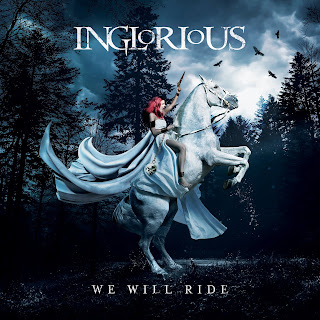 The Brit classic heavy rock band of INGLORIOUS returns back in business with its brand new and already fourth full-length release, "We Will Ride" through Frontiers Music this February.
The new opus 'welcomes' the two new members of Inglorious; guitarists Danny Dela Cruz , Dan Stevens and bassist Vinnie Colla, who joined original members vocalist Nathan James and drummer Phil Beaver.
As I already mentioned above, Inglorious has released three albums so far that all of those three are solid samples of pure and classic 70's, mid 80's, hard rock stuff. Vocalist Nathan James has a really strong and passionate voice that takes the whole band into a higher level.
"I had a lot of time to think about what I wanted to write about on this album due to Covid-19 pushing the recording back twice. I chose to write about things that have inspired me in the last two years. Like everyone right now, I am consuming much more TV than usual, in the form of dark and sinister Netflix documentaries mostly. These have definitely inspired the stories this time around. As far as the sound of the album and the recording process, it was very different than anything this band has done before. Recording with this line up for the first time and also it was our first time ever working with a producer. Romesh Dodangoda has really made this album sound unlike anything we have created before and the new guys have brought influences to our music that I'm super excited to show everyone's" concludes James.
The new record kicks-off with the classic and in-your-face tune of "She Won't Let You Go". A track that reminded me a  bit of the THUNDER's earlier recordings. Powerful with James' amazing vocal lines, this tune grabs you at once and leaves you hungry for more! The groovier and heavier "Messiah" is a killer one while in "Eye Of The Storm" INGLORIOUS is delivering one of the best songs out of "We Will Rise". A true modern melodic rock gem and, in my humble opinion, one the band's best tracks ever! "Cruel Intentions", "Do You Like It" and "God Of War" are three more great samples of pure and classic Brit heavy rock stuff!
This is a truly amazing record all the way! INGLORIOUS with "We Will Ride" achieve to top themselves and deliver a great opus and without any doubt their best effort to-date!
Songwritting : 9
Production : 9
Songs : 8
Musicianship : 8
Overall rating : 8,5 / 10