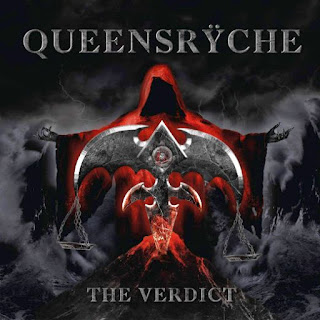 Queensryche's strongest 'weapon' is without any doubt their lead singer Todd La Torre. His powerful, in-your-face and superb performances makes the final result of "The Verdict" a pleasant ride through Queensryche's world. A world full of big an' heavy riffs, beautiful melodies, strong arrangements and a thunderous progressive sound that this band is capable of delivering.

"The Verdict" sounds 'old' and new in a unique way! Yes, Queensryche achieved to take the best of elements of their period with Geoff Tate (Operation: mindcrime, Empire e.t.c.) along with a fresh and more updated 'air' and to create a really amazing album that stands proudly besides the band's earlier releases. The two old members of the band, Michael Wilton (guitars) and Eddie Jackson (bass), have finally found, once again, the inspiration to write great tunes and along with La Torre & Parker Lundgren (guitars) are delivering just great music; simple like that!

The songs that steal the show here with the first listening are without any doubt the metallic-prog gem of "Light Years", the amazing and heavy opener of "Blood Of The Levant" (with the breathtaking twin guitar attack!!!), "Inside Out" which reminded me of Saigon Kick and, of course, "Dark Reverie"!! "Dark Reverie" is probably one of the best songs of 2019 so far! An epic mid-tempo, powerful and moodier song that I love it. One of the best songs that this band has ever recorded.

What we have here on Queensryche's newest opus is a 10-track album that stands proudly besides the band's earlier discography, no doubt about that. An album that includes every little thing that we are used to and still love to listen from Queensryche and that is killer songs, killer guitars, solid arrangements, breathtaking vocals and inspiration!