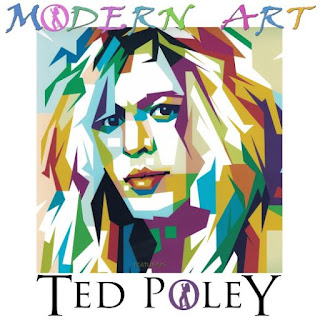 Ted Poley is no stranger to the melodic hard rock fans around the world. With Danger Danger he achieved to build a strong fan base and released some classic albums such as 'Danger Danger", "Screw It" and "Revolve". He has, also, fronted bands like Melodica, Bonemachine and Tokyo Motor Fist.
He released three amazing solo records (Collateral Damage, Smile and Beyond The Fade) and,, nowadays, Poley is back in business with his brand new opus which is entitled "Modern Art". This new album features a more modern sound but also keeps the classic Ted Poley elements that are the catchy hooks n' choruses, the up-tempo rhythms and in general is 100% Ted Poley.

"Modern Art" kicks-off with the pop-ish melodic rock anthem of "New World". This is a superb sample of the new direction that Poley took for this album. Modern, melodic and catchy; simple like that! "Gypsy At Heart" is yet another interesting moment out of the new opus. Somewhere between Degreed and H.E.A.T. this song is one of my personal favorites here. "Bury Me", "Running For The Light" and the "Devil To My Angel" are all three excellent tunes that even they include some more modern formulas (for Poley's standards) they really kick some asses. All three feature this Degreed-esque vibe in it (Degreed is a band that I personally love), plenty of melodies and of course Poley's characteristic performances.

"I Know A Liar" is just killer modern melodic rock at its best!! This straight forward rocker is flawed to perfection and grabs your attention at once. I just love this song!! One of the best moments of "Modern Art" is without any doubt the song that closes this solid album; "Wilderness" is yet another magical moment. A track that mixes the classic melodic rock with the modern hard rock and it's filled with big harmonic lines, a chorus line to sing-a-long and a killer guitar work.

Ted Poley presents his brand new album and believe me it rocks big time! For sure, it's more diverse and kinda of different regarding his works with Danger Danger or his previous solo albums but it's 100% Ted Poley. Fans of bands such as Degreed and H.E.A.T. should check "Modern Art" immediately. Well done Ted!!!