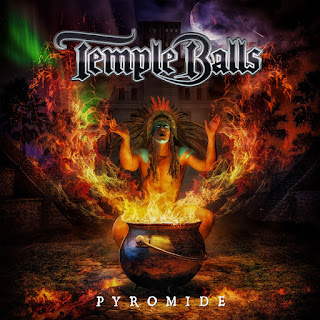 TEMPLE BALLS is a high-energetic and powerful heavy rock band that is hailing from Finland. "Pyromide" is the band's newest opus that is going to be released through Frontiers Music this April. "Pyromide" is Temple Balls's third record and it's produced by Jona Tee (H.E.A.T.).
The band’s debut album was recorded at Karma Sound Studios (Thailand) in May 2016 and saw the light of day on February 24, 2017. The album was produced by Tobias Lindell, who is known for his collaborations with Europe, Mustasch, and H.E.A.T. The second album, “Untamed” dropped on March 8, 2019 and immediately got fantastic reviews from music media such as Soundi and Burrn! magazines. The band, also, toured Europe as support fro Sonata Arctica, cementing their reputation as a stellar live act.
The opening tune of "Thunder From The North" is simply killer! Up-tempo, heavy and with 'big balls' attitude this track must be heard on a maximum volume. "Long Ways, Long Lies" is yet another hard hitting and fast-paced tune while in "T.O.T.C." the band brings back a huge and very Skid Row-esque track that will bring your house down!!! Huge!!! "Fallen Youth", "What Is Dead Never Never Dies", "Unholy Nights" and "You Better Run" are all powerful, melodic and powerful heavy rocking anthems for your ear pleasure! The album's ballad, "If Only I Could", is filled-up with power, emotions and great performances by the band's lead singer Arde Teronen .
Mark the day of April 16th on your calendars and go grab a copy of TEMPLE BALLS's "Pyromide" album!!! It's one of these records that combine all the energy of the glory 80's hard 'n' heavy scene along with some newer elements of bands such as H.E.A.T., WIG WAM and the result is just killer!!!
Songwritting : 8
Production : 9
Songs : 10
Musicianship : 10
Overall rating : 9,25 / 10