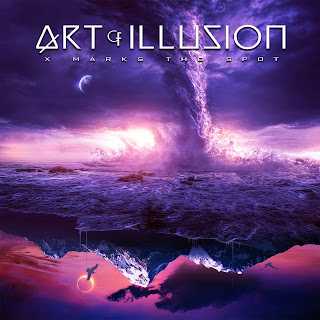 ART OF ILLUSION is the brand new super-group that consists of Work Of Art's lead singer Lars Säfsund and songwriter/producer Anders Rydholm, from the band Grand Illusion. Together they took the best elements from both bands plus a new and updated sound and created a simply fantastic opus for your ear pleasure.
Guests on "X Marks The Spot" (which is going to be released through AOR Heaven) are guitarists Jay Graydon, Muris Varajic, Kristian Larsen, Pelle Holmberg and Daniel Rydholm. The album, also, features drummer Frank ”Frallan” Nilsson, vocalist Per Svensson and Tony Paoletta who shares some steelar guitar licks. The music is written by Anders Rydholm.
The whole album is fantastic and melodioustatic from start to finish!! Imagine Grand Illusion with a strong dose of Work Of Art but, also, some Queen-ish 'pinches' here and there and you'll get the picture of how "X Marks The Spot" sounds. 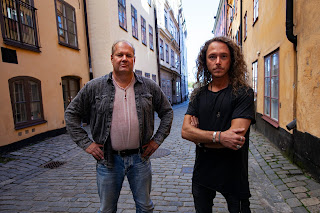 The first couple of songs, "Wild And Free" and "Run", are superb slices of pure and up-beat melodic rock stuff. Tons of melodies, catchiness to die for and soulful performances from one of the best shouters in today's melodic rock world. "My Loveless Lullaby" 'smells' Queen from miles away. It's really obvious how Queen has influenced the rock, and not only, world. This is probably one of this record's best tunes. An 'out of this world' song!! The prog (and again very Queen-esque) "Waltz For The Movies" is magical while in "Go" we have yet another amazing track that features a huge chorus line. The theatrical AOR anthem "Let The Games Begin" and the straight forward melodic rock gem of "Catch You If I Can" are two more highlights out of this fantastic debut.
Art Of Illusion is a new, exciting and sentational band that with its debut, "X Marks The Spot", comes to deliver a phenomenal opus all the way. For sure, this album is by far the most 'diverse' melodic rock album that I've listen to over the last years.  It's technical, progressive, theatrical, 'moody' and melodic as it gets and includes 12 gems for your ear pleasure!
Songwritting : 10
Production : 9
Songs : 10
Musicianship : 10
Overall Rating : 9,75 / 10
https://www.facebook.com/aoisweden