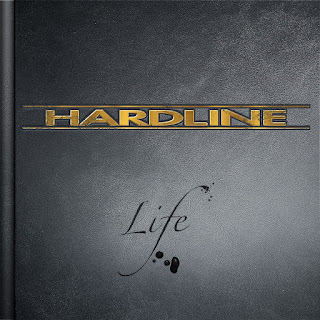 HARDLINE is a band that made a huge impact to the melodic hard rock world with its debut record "Double Eclipse" back in 1992. A strong album and a classic among the fans of this particular scene. Songs such as "Hot Cherie", "Life's A Bitch", "Dr. Love" and "Takin' Me Down" are all classics and are still in a daily basis in my cd player.

But due to the music changes back then, Hardline split and returned (with a different line-up) in 2002 with a new album entitled "II". "II" was much different regarding the sound of the classic debut and confused the die-hards that wanted a new  Double Eclipse. A live album followed in 2002 and "Leaving The End Open" in 2009 was Hardline's third official release. Again with a modern sound, for me was a great opus, "Leaving The End Open" confused again the feelings of their fans.

The very good "Danger Zone" in 2012 and the solid "Human Nature" in 2016 showed that Hardline is alive and kicking and is still creating good music.

Nowadays, Hardline strikes back with their brand new opus entitled "Life" through Frontiers Music s.r.l. The band consists of the amazing singer of Johnny Gioeli, the 'mighty' Alessandro Del Vecchio on keys, Mario Percudani on guitars, Marco Di Salvia on drums and Anna Portalupi on bass.

The new album kicks-off with a 'classic' Hardline track; "Place To Call Home" sure sounds like it jumped out from the band's debut. U.S. flavored melodic hard rock stuff with a big chorus line, a strong rhythm section and of course with 'super' Mario's amazing guitar licks on front row!!! Excellent start! "Take A Chance" features a nice groove in it and once again brings back memories from Hardline's hey days. The melodic hard rock parade continues with the solid and hard hitting "Helios Sun" while in "Page Of Your Life" we have the first ballad of the new album. For sure, these kinda of songs are a strong point for Hardline 'cause Gioeli's voice is so amazing when it comes to some power and emotional songs.

The heavy rocker of "Out Of Time" kicks some serious asses here while in "Hold On To Right", "Handful Of Sand" and "Story Of My Life" Hardline delivers two more solid tracks in the vain of the band's latest works. The cover of Queen's "Who Wants To Live Forever" is really remarkable and Gioeli's performances left me breathless!!!!

I think that, and without a sign of overreacting here, HARDLINE with its brand new opus "Life" presents its best effort to-date since the classic "Double Eclipse". A variety of songs (from hard hitting rockers to some beautiful ballads and back to action again...) plus the big talent of each member guarantees that "Life" will please both old and new fans!