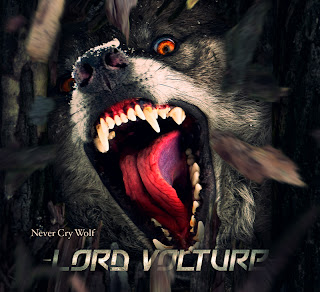 LORD VOLTURE is a Melodic Heavy-Power Metal act that hails from The Netherlands and "Never Cry Wolf" is their second release after the successful debut effort "Beast Of Thunder" in 2010. The band's music style is somewhere between Jag Panzer, Iced Earth and Vicious Rumors. The band consists of David Marcelis on lead vocals, Paul Marcelis on lead guitars, Leon Hermans on guitars, Simon Geurts on bass and Frank Wintermans on drums.

After the "Beast Of Thunder", which received great reviews over the net, the band toured with acts such as Blaze Bayley and Conquest Of Steel and achieved to build a strong reputation around their name. So, nowadays, Lord Volture is ready to unleash their thunderous music full of heavy in-your-face guitars, upbeat and bombastic tracks, grandiloquent epics and catchy rockers! As you all can assume by now, "Never Cry Wolf" is about a heavy record full of energy and some really serious attitude. I have to say that after some listenings I really liked this album. "Never Cry Wolf" is the opening track and it's an ass-kickin' heavy tune full of hard hittin' drums and heavy riffing. "Taiga" is a traditional epic tune with a darker vibe. "Wendigo" starts with a furious riffing and has a 'clever' rhythm rotation, which makes it very interesting! This is one of my favourite tracks from this album. "Celestial Bodies Fall" is overall a good song and features some really solid guitar work. At this ,I have to say that the band's strongest point, imo, is the guitar sound! The duo of Marcelis-Hermans does an excellent job here. Other highlights are the mid-tempo tune of "Brother" and "I'm King".

All in all, I have to say that this is an interesting release. I can say that even if I'm not a huge fan of this gerne I really enjoyed this one. It has power, energy and some screaming guitars! I would prefer some more melodies but let's stop complaining. I would recommend this effort to the fans of U.S. Melodic-Power Metal (or even Thrashy!!) sound and , also, to those who likes some serious soaring vocals with the necessery screams!