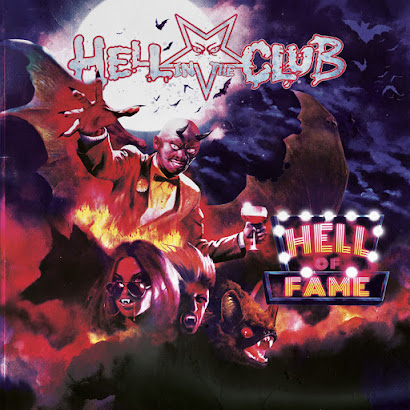 Italian melodic hard rock/metal band of Hell In The Club is back in business with its brand new, and already fifth official, opus entitled "Hell Of Fame". The new release will see the light of day on September the 4th through Frontiers Music.
As a fan already of their previous works, I was looking forward to listening Hell In The Club's new material. After the first spin of the new opus, I have to say that the band achieved to release a solid record all the way. It's heavy, it's melodic and imho "Hell Of Fame" not only will please the long time fans of the band but also it will gain new fans.
After the opening tune of "We'll Never Leave The Castle" which is in my opinion a very good and commercial opener comes the real thing of "Hell Of Fame"; "Worst Case Scenario", "Here Today Gone Tomorrow" and "Joker" are all simply amazing samples of the brand new album. All three tunes include powerful and catchy as hell choruses, edgy guitars and all three must be played on maximum volume. The groovier and heavier "The Last Of An Undying Kind" is pure Hell In The Club song and it's again a damn fine sample of this band's music while in "Nostalgia" we have a killer tune!!!! A more modern and updated song that will make you stand up and dance!! In some parts it reminded me a bit of Outloud's latest release. Really huge one!! "No Room In Hell" is yet another more metallic track that will make you bang your head. Check out also the song that closes this new album, "Lucifer's Magic", and I'm sure that you'll discover a great band with strong songs all the way.
As a big fan of Hell In The Club since the first record, with the title "Let The Games Begin", I have to say that this band dared to explore and expiriment with new an' fresh ideas, keeping at the same time the rock 'n' roll spirit alive and kickin', and to succeed strong, extremely melodic and powerful releases. Highly recommended.
Songwritting : 7
Production : 9
Musicianship : 10
Songs : 7
Overall rating : 8,25 / 10
https://www.facebook.com/hellintheclub/
https://www.instagram.com/hellintheclub/