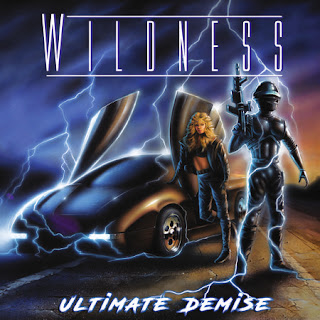 Wildness is a band that took flesh and blood back in 2014. The first year of its life, as a band, Wildness played in several live gigs. The line-up finally completed in 2016 wuth the addition of Marcus Sjösund (bass). The time has come for Wildness to record its debut opus.
A record deal with AOR Heaven helped the band to record and release its debut album back in 2017 that gained positive feedback from both fans and music press. In 2019, the band joined forces with Scream & Shout Music Agency for management and booking, and began working on the sequel to their acclaimed debut album. However, the process came to a halt when singer Gabriel Lindmark left Wildness in the autumn of 2019 due to musical disagreements.
After continuing working on the second opus during the rest of 2019, Wildness was finally able to announce Erik Forsberg (ex-Blazon Stone) as their new frontman in the spring of 2020.
After a couple of spins of "Ultimate Demise" I have to say that the band achieved to release yet another solid record full of big melodies, heavy guitars, strong arrangements and powerful performances. I have the feeling that overall "Ultimate Demise" is a bit heavier regarding the debut and that's a thing that I liked a lot.
Songs such as "Die Young", "Nowhere Land", "Cold Words" and the up-lifting "Renegades Of Love" are all superb samples of pure Euro melodic hard rock stuff with a more 'metallic' touch that the fans of this genre will love to listen to. The groovier "Burning It Down" includes a more U.S. Hair Metal flavoured taste in it while "Borderline" and "My Hideaway" are both melodicious and both are among my personal favorites out of the new record.
I think that the boys in Wildness continue their 'trip' in music business with yet another strong opus. With albums such as this new one (and of course their debut) Wildness have their chance to be among the elite of this genre.
Songwritting : 8
Production : 8
Musicianship : 8
Songs : 8
Overall Rating : 8 / 10