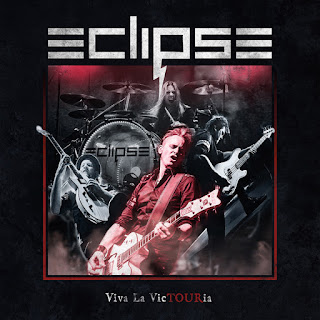 So, the first ever official live recording from the new giants of Melodic Hard Rock ECLIPSE is a fact. "Viva La VicTOURia" is entitled the band's brand new double (plus a DVD) cd and it's here to rock our world and to remind us the glorious days of the live perfromances (during these hard times).
This "rich' release includes the band's performance in Gothenburg on December 21 (2019) during their tour to support the "Paradigm" opus. The bonus material on the CD includes the studio track “Driving One Of Your Cars” ( Lisa Miskovsky's cover), acoustic versions of 'The Downfall Of Eden' and "When The Winter Ends', as well as three live tracks from the band's “Live from the Quarantine” pay-per-view special, which was recorded at Studio Grondahl in Stockholm, Sweden in April 1, 2010. The LP version also includes the exclusive bonus tracks ‘Hurt’ and ‘Mary Leigh’.
Bonus footage on the DVD and Blu-ray will feature interviews with the band around the creation of “Paradigm” and “Viva La VicTOURia”, additional footage from the Paradigm Tour (backstage, tour bus, behind the scenes, etc.), and some interviews with the band around the development of Eclipse, from the early days up until now, including some historic footage will be included.
Songs such as The Storm, Vertigo, Jaded, Shelter Me, United and Viva La Victoria (...among others) are included here and all these great tracks are well-performed with plenty of passion and heart from each member. Erik's passionate performances are in front row while Magnus Henriksson's 'tastful' and edgy guitars are the cherry on top. The crowd sing-a-long in each and every song and in general it's a powerful live recording from the masters of ttoday's Melodic Hard Rock scene.
Bottom line is that ECLIPSE are back in business with a killer live double cd. If you are a die-hard of Eclipse, then go out and grab every version of this (cd+DVD, LP, blue ray); it worths every single peny...trust me. Ladies and gentleman this is THE live album of 2020!!!
Rating : 10/10