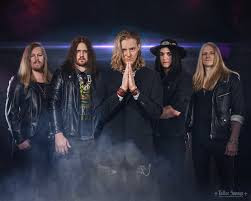 Wildness was originally intended to be a studio project by drummer and songwriter Erik Modin, but together with guitarists Adam Holmström and Pontus Sköld, and singer Gabriel Lindmark, the project developed into a real band in 2014. The first year, Wildness performed live with various session musicians playing bass before bass player Marcus Sjösund joined in 2016 and the Wildness lineup was complete.

The Swedish band started rehearsing and performing live diligently, and in September 2015 and January 2016 the digital and self-produced singles "Collide" and "Turning The Pages" were released. After the second single, the band got in contact with record company AOR Heaven and was offered a record deal by CEO Georg Siegl.

The band recorded their debut album in 2016 and 2017 with the help of mastermind and producer Erik Wigelius, who handled the production, mixing and mastering of the album. The eponymous debut album was released on November 24th, 2017 and immediately became a great international success among fans of melodic hard rock.

In 2018, the band performed at numerous festivals internationally and shared stages with well-known acts such as Dokken, H.E.A.T, Dee Snider, Crashdïet, Dragonforce, Arch Enemy, Warrant, Vixen and others and also had the honor to open for Pretty Maids, among others.

In 2019 the band joined forces with Scream & Shout Music Agency for management and booking, and began working on the sequel to their acclaimed debut album. However, the process came to a halt when singer Gabriel Lindmark left Wildness in the autumn of 2019 due to musical disagreements.

After continuing to work on the second album during the rest of 2019, Wildness was finally able to announce Erik Forsberg (ex-Blazon Stone) as their new frontman in the spring of 2020.

The second album, produced entirely by drummer Erik Modin, is named "Ultimate Demise" and is thanks to strong song material, Erik Forsberg's powerful vocals and Erik Wigelius' magnificent mix and master an album to be reckoned within the melodic hard rock universe in 2020!

Posted by Heavy Paradise
at Thursday, September 03, 2020
Email ThisBlogThis!Share to TwitterShare to FacebookShare to Pinterest