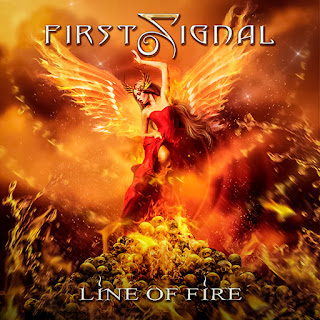 Back in 2010, a new melodic rock/AOR project was born. First Signal was the result of the collaboration between Harem Scarem's vocalist Harry Hess and the 'mighty' producer/bassist/vocalist Dennis Ward (Pink Cream 69, Khymera, Gus G. e.t.c.). The debut record gained positive feedback from both fans and music press and it is still regarding as a classic.

The idea of a new First Signal record continued to float over the air and after five years of waiting the time has come for the band's next step. This time around was Daniel Flores (The Murder Of My Sweet, Find Me) behind the production who helped First Signal's second opus to took flesh and blood. Once again, it was yet another solid record that filled with happiness the melodic rock/edgy AOR community.

The fact is that if you loved the first couple records of First Signal, then you'll love this one too, no doubt about that. Also if you love Harry Hess's voice then you'll have to add this to your collection as well. There are plenty of melodies, tons of catchiness, some excellent and crunchy guitar work and all the songs here are pure candy to the ears of each and every melodic rock/AOR fan out there.

Songs like the great opener of "Born To Be A Rebel", the melodic rock perfection of  "Million Miles" or the modern rock "Tonight We Are The Only" with its superb harmony are all three great samples out of this new First Signal opus. I really liked a lot the groovier and more straight forward tune of "Walk Through The Fire" in which I loved also the rougher vocals by Harry Hess.  "Line Of Fire", the emotional ballad of "Here With You" and the ultra commercial gem of "Need You Now" are three more great tracks out of "Line Of Fire" album.

Album number three for First Signal and once again they are delivering yet another hook-laden, ultra melodious and extremely interesting opus that can't be missed by any fan of the melodic rock/AOR scene.

Posted by Heavy Paradise
at Saturday, May 04, 2019 Labels: melodic rock
Email ThisBlogThis!Share to TwitterShare to FacebookShare to Pinterest