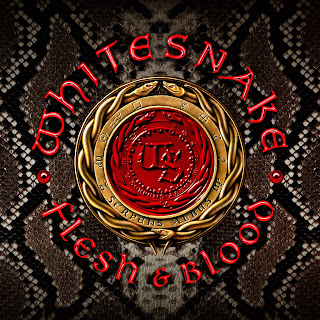 So, what we have here is the brand new release from hard rock icons WHITESNAKE! "Flesh & Blood" is entitled Snakes' brand new opus and it's going to be released through Frontiers Music on May 10th. After the very first spin of this new album, I have to say that Whitesnake have nailed it once again! "Flesh & Blood" includes all the best elements from the band's early works plus an updated sound and at the end sounds fresh, big and 100% Whitesnake.

David Coverdale's voice is on top form and the 'new' member Joel Hoekstra on guitars does an extraordinary job regarding not only the guitars but, also, the songwriting (co-writing six of the songs for “Flesh & Blood” with singer David Coverdale). Reb Beach is now an 'old' snake (originally joined Whitesnake in 2002) and he's delivering some tasty and impressive guitar lines. The rest of the band is Michael Devin (Bass), Tommy Aldridge (Drums) an Michele Luppi (Keyboards).

The opening tune of "Good To See You Again" is just pure Whitesnake at their best. In-your-face hard rock with Coverdale's nasty vocals on front row and the rest of the band on top form. One of the best Whitesnake songs ever, period! The up-tempo, rocking and 'happy' tune of "Shut Up And Kiss Me" is another cool track while in "Hey You(You Make Me Rock)" the band delivers yet another heavier and kinda of modern big rocker that I like it a lot!! With "When I Think Of You(Color Me Blue)" Whitesnake offers a huge commercial song; more in a Here We Go Again direction with big arrangements, beautiful melodies and, of course, these sweet guitars "When I Think Of You" is one of the true highlights here.

"Trouble Is Your Middle Name" rocks good with its earlier feeling, the foot stomping "Well I Never" is one of my personal favorites and the groovier "Get Up" (with its crazy guitar solo...) is again an excellent sample of Whitesnake's music.

Ladies and gentlemen, Whitesnake are back in business with a killer record all the way! David Coverdale and Co. nailed it once again with "Flesh & Blood"!! A true old-fashioned and ass-kicking hard rock gem with the signature of WHITESNAKE on each and every song!!