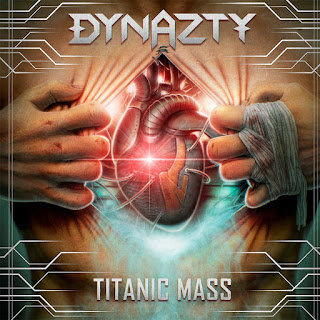 The truth is that the thing with these Swedes is gettin' better and better with every record. Dynazty started as a Sleaze/Hard Rock band with their debut album, they released the huge melodic hard rock/metal "Sultans Of Sin" and they turned into a melodic metal/power metal monster with "Renatus". Especially "Renatus" was a heavy to the bone record that even though it was a way much different compared to their previous albums, the final result was breathtaking.

Nowadays, Dynazty is back with album number five with the title "Titanic Mass" and once again itis aiming for big things. For me, it is the logical follow-up to "Renatus" sound. It's big, heavy, in-your-face without loosing the band's melodic elements and includes a bunch of some killer tracks that will grab your attention at once. The progressive 'pinches' of 'Renatus' are here, the soaring vocals of the extraordinary Nils Molin are givin' the extra push and the guitars are titanic!!!!

The song that kicks-off the new album is titled "Human Paradox" and it's a monster of a track! It's a classic and powerful Dynazty tune with an explosive chorus line, a tight as hell sound and harmonies to die for! "Untamer Of Your Soul" and "Roar Of The Underdog" are both perfect samples of Dynazty' s ass-kickin' music. Both are heavy but with a huge melody included and choruses to sing-a-long for days. In "I Want To Live Forever", the band delivers a great and powerful mid-tempo rocker with a darker vibe while in "The Beast Inside" we have another 'smoking' power metal anthem!!! "Crack In The Shell" is yet another killer tune; more straight forward with Molin's soaring performances in front row.

All in all, this is a great record all the way; Dynazty releases a monster and mind-blowing record that includes sharp and clean guitars, amazing performances by Nils Molin (one of today's best singers), well-written songs, a big and 'fat' sound and plenty of melodies. But, most of all, Dynazty is a band that it is not afraid to experiment and enrich its sound and that's a thing that reflects in "Titanic Mass".