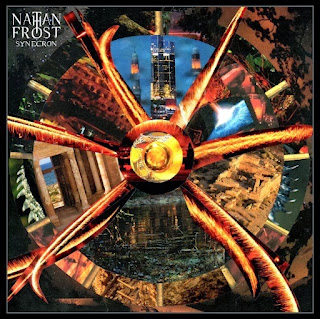 "Synecron" is an instrumental album that contains 6 tracks, over 8 minutes each, and it's about a 'dark', sometimes melancholic, sounded progressive metal stuff with some strong heavy fusion-heavy electronic pinches that makes it a very interesting purchase all the way. For example, the first track, "Empire Rising, 2000 A.D." is by far the most impressive tune here. It contains some really amazing guitar lines combined perfectly with the inspired keyboards of the mighty Derek Sherinian plus the grandiose drumming by Marco Minnemann and the result is this excellent track! Huge stuff! "Singularity" is another highlight here!  It's moving somewhere between progressive metal and heavy fusion and it can be characterized by its great arrangements and its breathtaking solos!! "Samsaara" is probably the 'darkest' track here; it's a piano driven song that contains a melancholic, dramatic in most of it, vibe but overall it can be described as another strong moment.

Bottom line is that "Synecron" is a very interesting album; it's a music journey through Nathan's world that includes great arrangements, virtuosity performances, inspired rhythms, a melancholic vibe but most of all well-crafted tunes! Check it out!!!
Heavy Paradise's Rating : 8/10