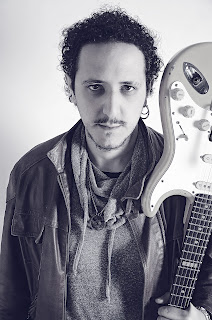 Simone Fiorletta hails from Italy and in the recent years has managed to 'build a strong reputation in Europe around his name because of his amazing skills on the six-string 'goddess'. This talented guy has already released three solo albums and is well-known for his participation in the progressive metal band of Moonlight Comedy and No Gravity.

Below you are going to read a very interesting interview that Simone gave to me and talked about his new album, the Italian heavy scene, his influences but also some other cool things. Enjoy.

Simone : Gladly. I can begin telling that since 2004 I release works with Finnish Lion Music (www.lionmusic.com), label of artists like Jennifer Batten, Mike Terrana, John Macaluso, Steve Vai and others. Exept the first solo album released only in Italy by a little local label, all my works have been distributed  in 27 nations. With eight albums, between solo or not under ten years, I had the opportunity to collaborate in studio and  live with Neil Zaza, John Macaluso, Mario Riso, Dino Fiorenza, Andy Kuntz, Dave Martone and others. At the same time, over the years, I have become an ESP Guitars, Blackstar Amps, InTune Guitar Pics e FT Elettronica endorser.

Heavy Paradise : So, a new album, “Personalities”, it’s on its way and I have to say that I enjoyed every minute of it!!! A well-crafted album and some really impressive guitar work here! Are you satisfied by the final result?

Simone : First of all, let you tell how much I'm pleased you liked my work. I'm so much self-critical, always I think that one can do it better or refine own method and inventiveness but, in “Personalities”, I feel to have give all my heart; so I'm satisfied for every note pressed in the album, for the time being, then we'll see. Besides the arrangement and the executive point of view, I'm satisfied for the sound I succeeded to take out, considering all was done by me in my “S.F. Studio”: I think to had obtained exactly what I had in my mind.

Heavy Paradise : How difficult is for an instrumental album to ‘survive’ in today’ s music scene? I mean that the fans of this kinda of releases are more ‘specific’. What’s your opinion about that?

Simone : I think that for the survival, talking about the selling, the question is the same for any musical genre, since piracy has arrived into a point of no return. Talking about the audience, I think that instrumental music, in this case guitar oriented, had a good appeal especially when it isn't one' s own skill pure demonstration. I'm saying that often so many guitarists let the virtuosity gain the upper hand, creating tracks which are only demonstration of technical ability. Personally, with much spontaneity, I prefer put the technique to use in the song, composing musically engaging tracks, cantabile lines, then giving rise in most complicated phrases without weighting on the final result. So I've received email with best wishes even from fans who aren't so much lovers or this sector experts. 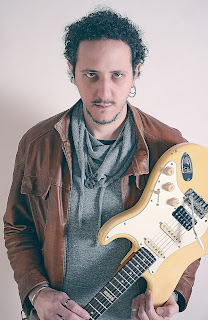 Heavy Paradise : I saw that for this album you collaborated with John Macaluso and Adrea De Paoli among others. Was this collaboration helpfully?

Simone : In my works I always try to involve well known musicians, people with a fame, musicians with a depth name. In “Personalities”, in addition to John Macaluso (ARK, Yngwie Malmsteen, James Labrie) and Andrea De Paoli (Labyrinth), there's Mario Riso, one of the best Italian drummer, and Dino Fiorenza, international fame Italian bass player. Andrea De Paoli and I are fraternal friends: since many years we collaborate in the musical world. With John Macaluso, as much as with Mario Riso and Dino Fiorenza, I established a good relationship and to involve them in my album has been the simplest thing of all the “Personalities” musical journey.

Heavy Paradise : How difficult is for someone to be a musician nowadays? Is this ‘job’ enough to make a living?

Simone : Albums release is more an artistic project than a working one. But it's real that if you are able to release your worldwide works, then always there is a personal profit that facilitate the musical working life too. For example, I have a music school and a recording studio and a lot of my clients come also because know my name; so if I haven't an intense album recording probably I would have had fewest clients, do you understand? The same thing for the endorsement, which allow to use high level instruments without overspend. Anyway there's always the artistic satisfaction when you receive approval from various world countries; it's really gratifying.

Heavy Paradise : In my ears, your style is more influenced by the American scene and guitarists such as Vai and Satriani. What are your main influences, Simone?

Simone : You have mentioned two artists that certainly have influenced my style. One of the first guitar hero I listened to, always I carry him in my heart, is the Master J. Satriani. Then I discovered Steve Vai to arrive at Greg Howe, Gutrie Govan, Vinnie Moore and many others. I think everyone influenced me, but as my fans say, I have succeeded to maintain my personality on the instrument.

Heavy Paradise : The Italian hard ‘n’ heavy scene is a fast growing one over the last years. Many bands from your country are releasing some really incredible efforts. How do you see the Italian scene generally and is there any ‘new’ band that you like the most?

Simone : Since many years in Italy there are good bands and big musicians; the fact is that not all have succeeded, over the years, to build a worldwide career. But we have Labyrinth, Vision Divine, DGM, Rhapsody Of Fire, Lacuna Coil and other famous bands, let alone the guitarist, as Marco Sfogli, that now are musicians of very good artistic importance. 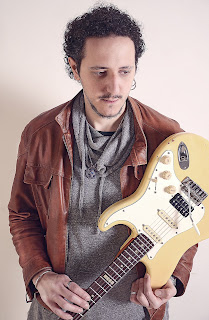 Heavy Paradise : Do you think that Facebook, Twitter and all these media are helpful for an artist to promote his work? On the other hand, the illegal download is the reason, for many artists, of killing music!! What’s your opinion?

Simone : First of all, building a career means realize that the way is long and hard, and it is not enough a facebook or youtube account to become famous. It needs pay one's dues, there aren't shortcuts. If you work hard every day and night, every hour, then over the years you'll can enjoy the fruits of your labour. But often the guys lose time seeking contacts on facebook inviting you to click "like” on their page, as if you really became their fan. The social network have their part, but anyway are a little tile of a big mosaic. Illegal download kills sales not music, so artists who shoot for diffuse their music, they shouldn't address the problem of piracy as first thing.

Heavy Paradise : If you had the chance to jam with two of your idols for a record, let’s say a future G3  , who would that be??

Simone : Considering that thanks to them I approached this world, I say Satriani and Vai.

Heavy Paradise : So, what are Simone Fiorletta’s future plans?

Simone : In this period I have accomplished a paper didactic method with cd and now I'm waiting for answers from several big record companies. Furthermore I will be part of Rezophonic, great artistic Italian musical project, thanks to dearest Mario Riso. In the works there is also something with John Macaluso, but I prefer await he begins to rumor. 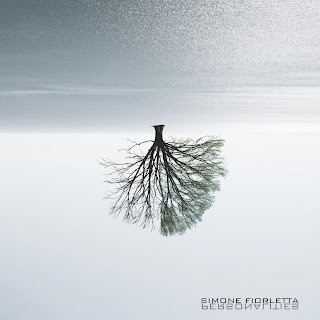 Heavy Paradise : At this point, I would like to thank you for this interview and to wish you all the best for your future plans and hope to meet you personally in the near future! Keep in touch!!!

Simone : Before saying goodbye to you, I would like to talk you about Francesco Salemme (notetoselph@gmail.com), my graphic designer/photographer/personal director and administrator of all the artwork making, in my opinion, a praiseworthy work. Now let me thank you for this splendid interview; thanks to all the readers who have spent their time with us. Certainly we will keep in touch, I invite you to write me on simone.fiorletta@gmail.com or www.facebook.com/fiorlettasimone