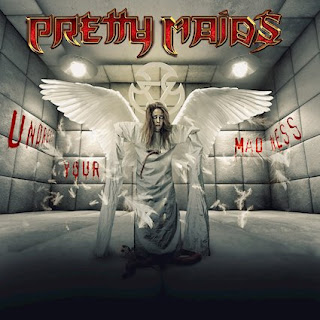 I think that if someone loves the quality melodic metal or hard rock music in general, then you gotta love Pretty Maids. There's no doubt about that. These Danish metal legends have already released numerous of great records and their songs stood through the test of time.

For me, Pretty Maids is one of these bands that I grew up with their sound, songs and albums. I think that to write an article about these guys will take me the whole day or week. Nowadays, Pretty Maids return to music business with their brand new opus entitled "Undress Your Madness" that is gonna be released through Frontiers Music this November.

The production for this new record is handled by the 'mighty' Jacob Hansen who has given a big and bold sound and at the same time captured the old Pretty Maids sound along with a more 'modern' approach. The result is once again thunderous!!

The first highlight comes with the classic Maids track "Serpentine". 100% Pretty Maids song and that means big guitars, a powerful metallic sound and Ronnie Atkins's superb vocal performances in front row. Excellent start! In "Firesoul Fly", the band delivers the sweet and more hard rocking sound while in "Undress Your Madness" we have yet another pedal to the metal song. Heavy guitars and a bit moodier vibe here (both classic and trademark Pretty Maids...) with a monstrous chorus line enough to blow out your speakers. "Runaway World" sounds like it jumped out from the band's earlier works and to be more specific from albums such as "JUMP THE GUN" or "SIN DECADE". The heavier "If You Want Peace (Prepare For War)" and the ultra melodious tune of "Shadowlands" (with its perfect chorus line...) are two more highlights out of the new opus.

The fact with Pretty Maids is that this band never disappoints with each release. For me "Undress Your Madness" is yet another gem of an album that includes some of the best tunes that this band has ever recorded. If you want heavy guitars along with heavenly influenced melodies and unique vocals, then PRETTY MAIDS is your band!!! KILLER STUFF!!!