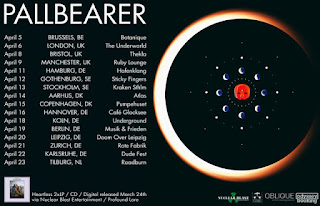 Fervent Arkansas progressive doom quartet PALLBEARER are incredibly pleased to announce that they will be gracing our UK and European stages in April 2017, for 16 show dates.

Kicking off at the Botanique, Brussels - this run will take PALLBEARER across Belgium, Germany, Sweden, Denmark and the UK before concluding at distinguished Tilburg, Netherlands based underground music festival Roadburn. The 2017 edition of the festival has been part-curated by renowned musician and artist John Baizley (BARONESS), who personally hand-picked PALLBEARER for the illustrious event.

PALLBEARER commented on the tour news:
"As always, we are completely thrilled to venture beyond our own dystopian shores. Europe and the UK have always been a killer experience for us and our return could not come at a more crucial time."

The dates read as follows:

The »Heartless« tracklisting reads as follows:

PALLBEARER commented on »Heartless«:
"This album finds us exploring new territories; instead of staring into to the void - both above and within - »Heartless« concentrates its power on a grim reality. Our lives, our homes and our world are all plumbing the depths of utter darkness, as we seek to find any shred of hope we can."

Initially formed in 2008, PALLBEARER grew from the fertile underground metal scene of Little Rock, Arkansas - releasing their debut full-length »Sorrow And Extinction« in early 2012. The record made an immediate and immense impact on die-hard doom fans and metal critics alike, also forming the four piece fans outside of the metal scene. Hailed by Rolling Stone as the "#1 Metal Album Of 2012," the album also received the coveted "Best New Music" stamp of approval from Pitchfork and landed the band on end of year lists at SPIN and NPR.

Their formidable sophomore record - 2014's »Foundations Of Burden« featured on countless critic's end of year lists and cemented their reputation as an unstoppable and emotive force - driving doom beyond its imagined limits, carving themselves an entirely original path through the realm of heavy music. The record charted in the Billboard Top 100, achieving Pitchfork's "Best New Music" accolade and Decibel's highly honoured "Album Of The Year" award.