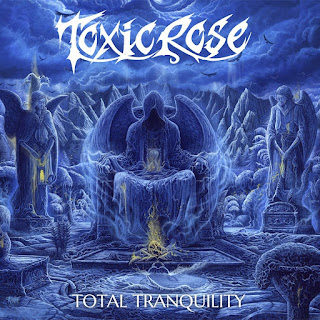 Back in 2012, I received the promo of a band called Toxic Rose for a review in Heavy Paradise. And even though it was a short EP, it was a mind blowing stuff that included some bad-ass performances, tight as hell songs that recalled to Crashdiet, early Motley Crue and Faster Pussycat's music, hellish guitars and a solid production. So, I was looking forward to the band's next step, a full-length album.

The time is now for Toxic Rose to release its debut record through City Of Light/Rock it Up Records. And the question is 'what to expect from "Total Tranquility"? The answer is simply like that; ass-kickin' melodic hard rock/metal stuff with a strong dose of Modern Sleaze Metal with powerful vocals, aggressive guitars, huge melodies and an overall bombastic sound that will grab you at once and at the end will leave you hungry for more! 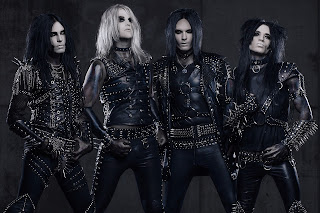 The band shows its teeth with the first track; "World Of Confusion" kicks-off the party and we have a the first winner with this big time in-your-face rocker that takes no prisoners. Next, with "The Silent End Of Me" and "Killing The Romance" we are dealing with two superb tunes. Both are fast-paced, aggressive rockers that features Andy's TXR (lead vocals) bad-ass performances, some really 'tasty' and punchier guitars and an overall late 80's vibe for the extra flavor. In "We Own The Night", I get the feeling that I'm listening to Reckless Love's much heavier edition while in "Because Of You" Toxic Rose showing their more sensitive side and, at the end, it delivers a great ballad. The track "Total Tranquility", which closes the album, is yet another killer melodic modern metal gem that features a haunting melody and a darker vibe.

Toxic Rose brings back the late 80's, early 90's, sleaze metal scene with style and includes a bad-ass attitude, a balls to the wall sound, some really clever hooks and choruses to stick with, excellent guitars and all the necessary image to become the next big thing!

Track Listing :
01.World Of Confusion
02.Silent End Of Me
03.Killing The Romance
04.Sinner
05.We Own The Night
06.Reckless Society
07.Clarity
08.Because Of You
09.We All Fall Down
10.Total Tranquility