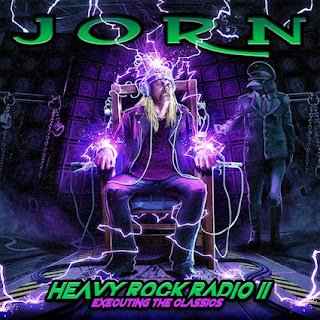 JORN is without any doubt one of the best shouters out there. His voice is very gifted and sounds like the perfect mix between R. J. Dio and David Coverdale. During his long time career, Jorn has released some great albums but, also, he covered some timeless and classic tunes from legendary bands.

If you aske me, I have no problem with cover albums as long as the new versions are focused to the originals or with cool twist in it (heavier, funkier, e.t.c.).

Jorn is back with a brand new record (a cover one), "Heavy Rock Radio II - Executing The Classics", that is gonna be released through Frontiers Music on January 24th. The album features songs from bands such as Foreigner, Bryan Adams and Russ Ballard among others.

I think that the choice of the songs was wisely taken and, apart from Purple, DIO or Whitesnake, Mr. Jorn covers a wider and more classic rock style, in general. For the fans of classic rock/heavy rock sound or for the fans of JORN...or for all the fans of good music, "Heavy Rock Radio II-Executing The Classics" is a must purchase.