French melodic Power Metal masters KingCrown release their first official video and radio single for the song “The Flame of My Soul”! 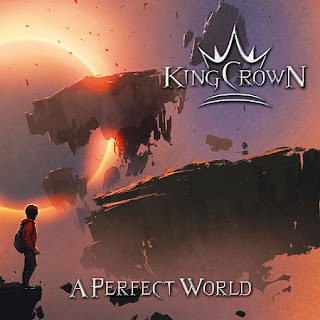 The track is taken from the band’s debut album “A Perfect World” out on November 1st, 2019 and can be viewed here: https://youtu.be/RdUXn42fCaI
Filmed & Edited by: Mehdi Khadouj ||Actors: Nathalie Robot, André Kergonna
Digital single of “The Flame Of My Soul” is now available across all digital and streaming platforms!
"A Perfect World" can be pre-ordered here: https://smarturl.it/kingcrownaperfectwor

Available on Digipack CD & Digital streaming/download format.
The powerful melodic metal band KINGCROWN present their new masterpiece "A Perfect World“. After a first album “Resilience“ under the name Öblivïon, it was time for KINGCROWN to make their debut album under this name! “A Perfect World“ is an amazing mix of neo-classical, modern metal with a touch of progressive sound, a new step to conquer all lovers of Heavy Metal. Mixed and mastered by Roland Grapow in Grapow Studios (Slovakia), which provides the guarantee that we are facing a modern and powerful production!

"A PERFECT WORLD" will be released through ROAR! Rock of Angels Records, physically and digitally worldwide on November 1st, 2019