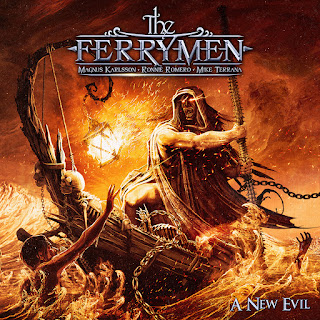 
With their debut opus, a couple of years back, they delivered an excellent and classic melodic metal monster that gained a positive feedback from both fans and music press. Nowadays, the band is ready to take the metal world by storm with its second record entitled "A New Evil". The new album is going to be released through Frontiers Music this October.

After a couple of spins of this new opus, I have to say that "A New Evil" is exactly what I've expected from Magnus Karlsson and his gang. Powerful, in-your-face, epic and melodic as it gets. For those who are into Karlsson's songwriting and, of course, playing, they know what to expect; heavy riffing, crazy soloing, thunderous hooks and choruses and great arrangements. Ronnie Romero's vocals are powerful, in-your-face and rockets the final result into a higher level. Terrana is well-known to the metal community as one of the best and more technical drummers out there. So, with this winning team nothing can go wrong.

The album is full of classic metal with tons of melodies, some crazy and inspired guitar work and songs that will attractive the fans of Allen/Lande works but, also, those who love DIO, Jorn, Rainbow and Karlsson's solo works. Highlights here are the fast n' furious "Don't Stand In My Way", "A New Evil", the solid "The Night People Rise" which reminds a bit of Starbreaker's music, the epic and moodier "Heartbeat" (which is probably one of the best tracks here), the killer and extremely melodic metal monster of "No Matter How Hard We Fall" and "You Against The World".

The Ferrymen's newest effort is a true melodic metal beast ready to make you bang your head!! Magnus Karlsson, Ronnie Romero and Mike Terrana is a winning team and together they created a record that is going to be a future classic among the metal community. "A New Evil" contains tons of melodies, huge choruses, breathtaking guitar work, a solid production, killer songs and powerful performances.......do you want more?