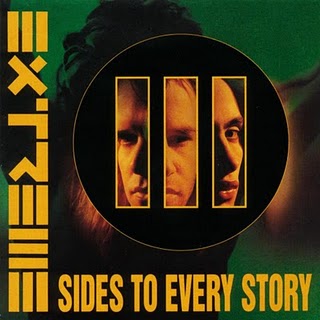 Album number three for U.S. funk metallers of Extreme. With their debut album they offered a fine example of funky hair metal music full of superb guitar work in the vain of the great Van Halen. Their second, "Pornograffiti" was, and still is, a masterpiece of that gerne. Many hit singles, including the mega-successful tune of  "More Than Words", jumped out from that release! Extreme was a band that the heavier fans didn't liked so much and for the 'softer' ones were too funky for their tastes!
For me is one of my all time favourite groups! I just love the guitar work from the great Nuno Bettencourt! This guy is so talented when it comes to riffing and soloing! A very inspired guitarist.

So, as I said, "III Sides To Every Story" was the band's third album. It continued were the "Pornograffiti" stopped. Big and amazing riffs and solos, catchy choruses, a tight musicianship and strong performances. Maybe this one is not a classic like their eponymous "Pornograffiti" but it's a very good one and a more mature release. It has all the unique elements that made this band huge. I really can't find a weak song here. Every track has something special to offer to the listener. Bottom line is that for Extreme fans this is a must have, for the others is a great way to discover a superb band! Buy it!
HeavyParadise's Rating: 8,5/10 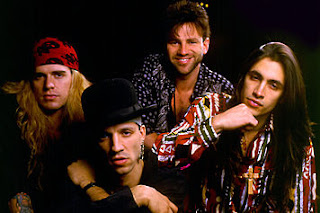