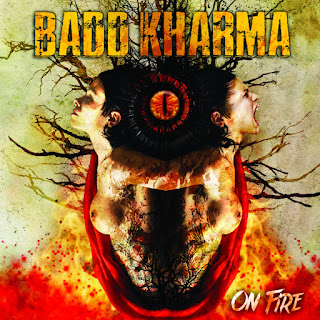 The Greek melodic hard rock/AOR and Metal scene in general is a fast grown scene over the recent years. With many great bands that jumped out of nowhere and delivered amazing records the Greek scene has nothing to be jealous of from 'traditional' countries such as Sweden, UK, Germany e.t.c., that's a fact. The latest 'discovery' is BADD KHARMA  that with its debut opus "On Fire" comes to kick some serious asses.

The sound of Badd Kharma is something between Jorn Lande, DIO, Rainbow, Malmsteen but also features some newer melodic heavy rock elements (Eclipse) as well. 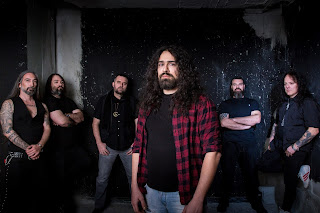 The track that kicks-off this impressive debut is called "Never Surrender". This one is probably the best song in "On Fire". Ass-kicking, powerful and anthemic "Never Surrender" is the absolute melodic hard rock hymn!!! The chorus is pure delight!!! I can't wait to hear this one on stage!!! "Land Of The Free" is a fast-paced hard rock track made for big arenas while in the metallic "Still Our Man" we have another solid tune out of the debut. This one is dedicate to RIOT's guitarist Mark Reale (R.I.P.). With "Rise On Fall" the band is totally on fire!!!! Amazing and sharp guitars, a double-kick thunderous drumming and in-your-face vocals are the ingredients of this superb song. For sure this will be another favorite live track!!! The more commercial hard rock hymn of "Light In The Dark" is just killer and the Moore-esque blusier "Fool's Parade" is simply breathtaking.

"Burning Heart", "Lost In Her Eyes" and "Still Unbroken" are three more highlights out of the debut. All three are superb melodic hard rock samples that I really can't wait to hear them live!!! Killer stuff!!! The Japanese edition features two songs (both are killers....) as a bonus; the AOR-ish "Living Inside A Dream" and the groovier heavy rock "I Walk Alone".

Bottom line is that BADD KHARMA with their debut opus are ON FIRE!!!!! Strong arrangements, killer guitar lines by the dynamic duo of Gregory Giarelis & Manolis Tsigkos, a tight musicianship as hell, a very charismatic and passionate singer and killer songs are the ingredients of this fantastic debut!!!! Buy or die...........