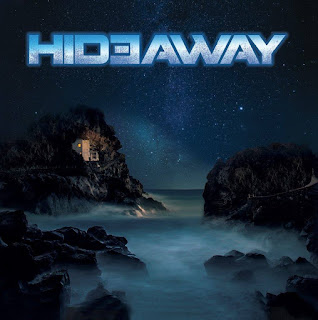 Hideaway is a melodic hard rock/AOR band from Athens, Greece. Originally was formed back in 2010 by guitarist Dinos Georgiou (ex- Metallist) and keyboardist Peter Papadimatos. Later on, Harris Georgiou joined the band taking the place behind the drumkit. Over the next years the band worked hard on new material. The missing piece of the puzzle was to find a lead singer.

Manos Fatsis was the band's lead singer. A very experienced musician and the singer of Odyssey Desperado's amazing debut album. With Manos Fatsis as the lead shouter and the additions of Johnnie Kontos (bass, ex- Flying Mercury) and Dimitris Paloudis (guitars, Rock Bottom) the puzzle was completed and finally HIDEAWAY took flesh and blood!

A record deal with the Danish company Lions Pride Music was the next step and nowadays the band is ready to unleash its debut opus with the title "Hideaway".

The opening tune of this debut "Another Day" is probably the best track of this record! A fast-paced and edgy tune that includes heavy guitars, a huge rhythm and, of course, a chorus line to die for. Really impressive opening for a debut. Next in "Promises" we have yet another interesting moment out of "Hideaway". Imagine something between Wild Rose and Odyssey Desperado and you'll get the picture.  The melodic "Calling You" and the more 'progressive' "Lonely Nights" are two more great samples of Hideaway's music. One of the best tracks here is without any doubt the commercial and feel-good tune of "When You Feel". A track that recalls the sound of the mid 80's, early 90's, and that means up-tempo vibe, sweet melodies and a hook and chorus line to sing-a-long. The edgier "Masquerade" (with its huge guitar work) and the epic hard rock anthem "Unknown Hero" are pure melodic hard rock heaven!!!

If you love bands such as Odyssey Desperado, Wild Rose, Outloud e.t.c., then HIDEAWAY's debut is a must add to your collection. It's an album that has all the 'package' to become really big!! Great arrangements, a singer that can sing, killer tracks, beautiful melodies and memorable hooks n' choruses to sing-a-long again and again!! Mark the 30th of September on your calendar and go out and grab your copy....you won't regret it, believe me!