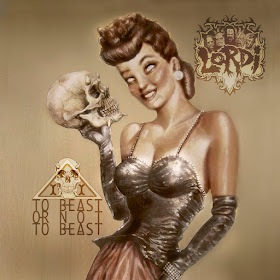 Do you remember the Finns LORDI, or  the "monsters" as they were called by the international press, who had won the Eurovision Song Contest in Athens in 2006? If yes, then it is time that the band is releasing its sixth effort which is titled "To Beast Or Not To Beast".

2012 was the fateful year for Lordi;  on one hand they celebrated their twenty years as a band, ten from the release of their debut, and on the other in 2012, their original drummer passed away.

The band in the past year went on tour, changed the keyboardist and went to the United States with the mighty Michael Wagener, as the producer, for recording their new album. Personally, I can not say that I'm a big fan of the band but I've liked almost all their releases and I've discovered some pretty good moments of their every effort. But enough with the "yesterday", let's see what the new album has to offer!

My first impression is that Lordi sound more heavy and 'brutal' than ever ! The opening track,  "We're Not Bad For The Kids (We're Worst)", shows that LORDI are not joking and they are ready to rock our world with this ass-kicking heavy rock 'n' roll anthem with Mr. Lordi powerful performances in front row!! The "I Luv Ugly" continues to the same up-tempo rhythms with the chorus line to bring back memories from their won in Athens. "The Riff" is laced with a fair amount of Ramstein and reflects the best way of Lordi nowadays! In "I'm The Best" the band sounds even more heavy while in "Happy New Fear" they have added several new modern elements but they launch them with their known in-your-face way.

Closing my review, I must say that I enjoyed every single moment of the album! These guys have managed to link the past with the present, the classic heavy metal with modern sound, the theatrical element with the melody and finally to offer us one tight album that will not go unnoticed!
HeavyParadise's Rating : 8/10