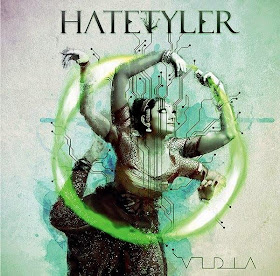 In 2012, the Italian metal band of Hatetyler presented their debut effort "The Great Architect". In that album, Hatetyler mixed the thrash scene of the 80's with a modern twist but, also, some progressive elements as well and the result was pretty good. And as I said back then, I liked their debut even though the 'aggressive', sometimes brutal, vocals are not my cup of tee.

Nowadays the band is back with the brand new "Vidia" release. Marco Pastorino is responsible for the production here and the guitars and the mighty Simone Mularoni (DGM) for the mastering and mixing of "Vidia".

After a couple of spins, I have to say that Hatetyler in "Vidia" is movin' into the same modern metal/thrash paths as in their debut but with a crunchier production, a bigger sound and with better songs!! The sound is a bit updated, the melody is also here and the electro metal pinches are giving the extra flavor!! The opening tune of "Vidia" reminded me of Shotgun Messiah's "Violent New Breed" album but with more aggressive vocals and the necessary progressive 'touches'!! "Listen To My Tragedy" is my personal favorite from the new effort. A more straight forward rocker with a nice hook and chorus that stucks in your mind, a very good harmony and a great riff! A killer tune! "Awaking The End" is fast, heavy with a darker vibe while in "Make Me Stronger" we are dealing with a really huge mid-tempo song with an incredible melody and passionate performances!!

All in all I have to say that all my expectations are full-filled with Hatetyler's new release! In my review of their debut I said that I was expecting bigger things from them in the near future and with this new one they achieve to create a stronger, heavier with more melodies opus that will put them right into the Champions League of the modern metal scene! Well done!
Heavy Paradise's Rating : 8/10