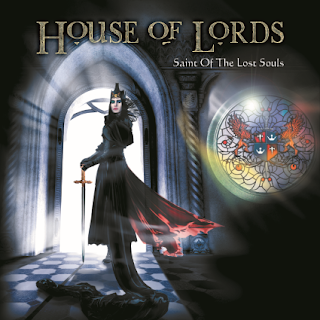 One of the most respectful bands of the classic hard rock scene is back with a brand new record. “Saint Of The Lost Souls” is House Of Lords’ tenth studio album, following up the highly successful “Indestructible”. Recorded and produced by the band’s singer and mastermind James Christian, this new collection of songs continues to deliver solid n' powerful melodic hard rock stuff in the vain of the band's earlier sound. Plus to the above mentioned things, is a more updated and fresh approach and there you have another strong House Of Lords opus.

The band nowadays consists of the legendary James Christian on lead vocals, the extraordinary guitarist Jimi Bell on guitars, BJ Zampa on drums and, the new addition, Chris Tristram on bass guitars.

House of Lords debuted in 1989 with the release of their self-titled album, a record which is still regarded as one of the best arena rock releases of the 80’s. 'Sahara' and 'Demon's Down' were both superb slices of pure and classic hard rock stuff and with their comeback album 'Power And The Myth' in 2000 House Of Lords showed a more progressive and mature direction. Their heavier 'World Upside Down' made a huge impact to the hard rock freaks out there and all their next albums that followed “Come to My Kingdom” in 2008, "Cartesian Dreams" in 2009, "Big Money" in 2011, and “Precious Metal” in 2014 were all solid and included some killer tunes.

"Harlequin" the opening is really solid! Classic HOL sound in it with Christian's powerful vocals and Bell's amazing guitar lines. "Oceans Divine" sounds like it jumped out from 'World Upside Down' and it's another killer tune out of the new effort. With "Hit The Wall" the band offers a gem of a track; it features a beautiful melody in it and harmonies to die for and along with the more commercial approach makes it one of the best songs here. Love it!

"The Sun Will Never Set Again" is a nice ballad while with "Reign Of Fire" House Of Lords delivers another up-tempo and feel-good rocker. "Art Of Letting Go" and the epic "Grains Of Saints" are both delightful melodic heavy rock at its best!

The name of House Of Lords is synonymous to quality, excellent melodies, power and passion in the melodic hard rock scene. "Saint Of The Lost Saints" is yet another great record for this legendary band that can't be missed by any fan of this genre.